Editor’s Note:  This article, written by David D. Judson, Editor-in-Chief of Stratfor WORLDVIEW, is about a 9 minute read and is well worth your time. This analysis was originally run in 2015 but fits us today as well.

The joy of children, the sharing of gifts with loved ones on a sacred day, the renewal of faith. These elements of a holy day are not the normal fare of Stratfor — we normally devote ourselves to the study of geopolitical power and not to the intangibles of human experience. One day a year, however, we can set aside our professional detachment to tell a Christmas story. And there are many Christmas stories. It is a holiday with deep and diverse roots and one that has, by the 21st century, become truly global — and for that matter, geopolitical. And so I will share my own, with a bit of context. I hope that readers will indulge me in this small departure, one that I think comports with the way Stratfor views the world and its complexities.

My Christmas story took place a decade ago in Antalya, Turkey. This city sits, appropriately enough, a few miles away from Demre, the modern name for the ancient Roman and Byzantine city of Myra. And it was in Myra, in A.D. 270, that the original St. Nicholas was born. 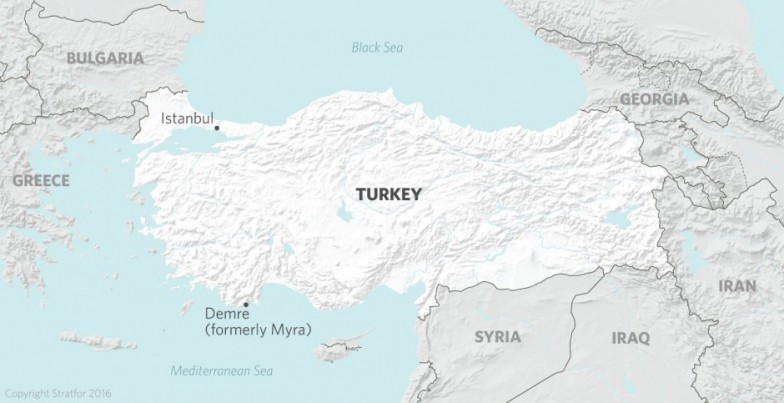 I was visiting family in Antalya, my wife Nermin’s hometown. On Christmas Day I took a walk with my five-year-old niece, whose name is Mine (pronounced Mee-neigh). We were walking hand-in-hand and talking about her Christmas, which the Turks call Noel. The Turkish Noel is celebrated on New Year’s Eve and is a secularized version of the West’s Christmas tradition. Children wait for Noel Baba, or Father Christmas, who comes down the chimney or through a window to leave presents under a pine tree. Across the country, streets are decked out in lights as on any American Main Street. And Iyi Noeller, meaning good noel, is the greeting one shares with passersby or with a friendly shopkeeper.

“Uncle David,” Mine said to me, as a hint perhaps, “Nayeel Baba is bringing me a bicycle.” I need to explain that Nayeel is a common Turkish name. The Turks as a nation contrived Noel Baba as a stand-in for the Western Santa Claus. Mine, however, took the innovation a step further; her five-year-old mind corrected the pronunciation to something more logical and more authentically Turkish. I thought then, as I do now, that Nayeel Baba works just fine. It is simply an additional piece of glass in the cultural and historical mosaic that the global celebration of Christmas has become. 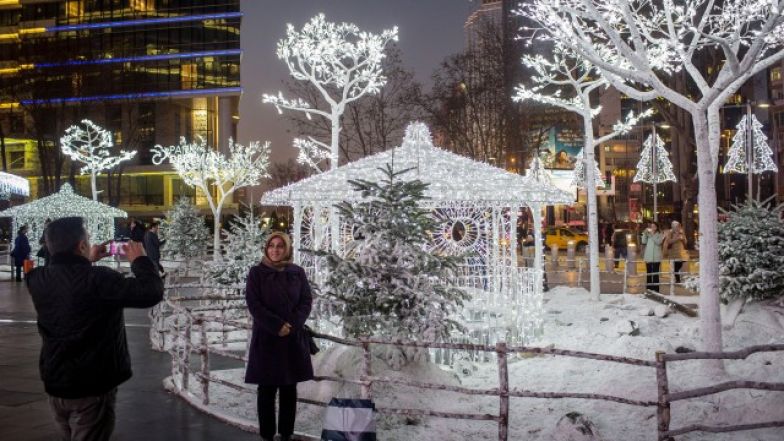 A woman has her photograph taken in front of Christmas decorations outside an Istanbul shopping mall on Dec. 22.

Cynics may attribute Christmas’ spread to the success of modern marketing and globalized commercialism. And of course I made a mental note to check with Nermin that we had Nayeel Baba’s bicycle promise covered. But at the same time, I found myself thinking that if the Bishop of Myra from down the road — the original St. Nicholas — were watching from on high, he would no doubt approve.

For what young Mine did to reshape the name Noel is emblematic of the syntheses of names, traditions and characters that has been going on for well over two millennia.

In Christendom, Dec. 25 celebrates the birth of the Messiah, Jesus Christ. The rituals by which we mark the date today, however, trace back further. And with many twists and turns ever since, what we have is a holiday spirit that is embraced across the world by people of virtually every faith, including my Turkish niece in Muslim Turkey. So let us go back a bit over a rough summary of history.

Long before the advent of Christianity in the first century, the pagan world celebrated the winter solstice, the shortest day of the year. In northern Europe the holiday was called Jul, which entered English as yule, now a synonym for Christmas.

The world into which Jesus Christ was born — probably not in year 1 of the Gregorian calendar, and probably not in December — was not friendly to the religion he founded and his disciples preached. After executing Jesus, the polytheistic Roman Empire turned relatively quickly to persecuting the rapidly spreading practice. The crackdown began in earnest in A.D. 64 under Emperor Nero and continued for over two centuries. The most iconic punishment for Christians was the damnatio ad bestias, casting the Christians to animals – a punishment formerly reserved for slaves and hardened criminals. 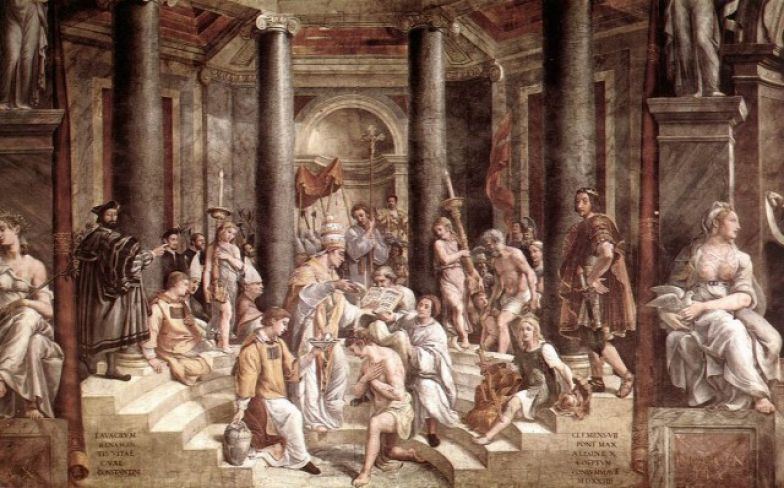 The baptism of Constantine as depicted by artists at the workshop of Italian artist Raphael, produced between 1517 and 1524.

But what first brought St. Nicholas into the story of Christmas was the spread of Christianity into the British Isles beginning in the third and fourth centuries. The newly converted saw in the figure of St. Nicholas — and his December feast celebration — a surrogate for a pre-Christian deity mentioned by some historians, who possessed many of the same attributes of generosity. The mid-December traditional Roman feast of Sol, the sun god, also likely helped push the new celebration along. 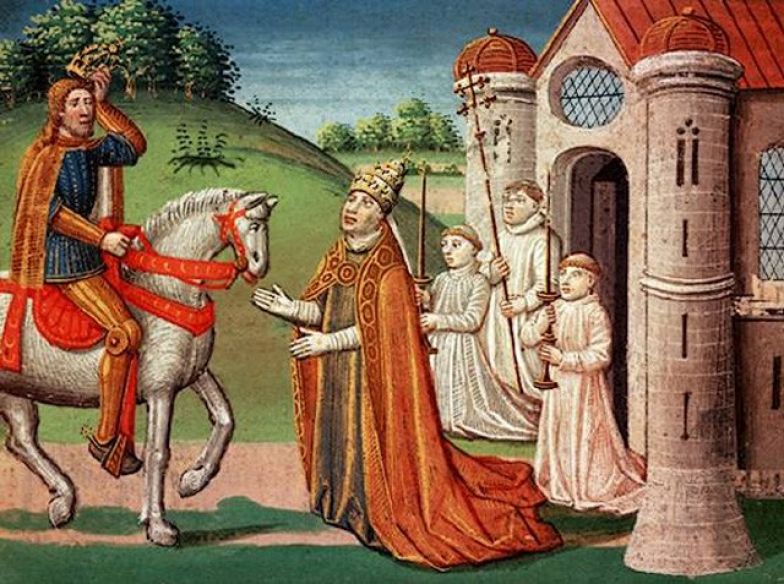 A 1493 depiction of Pope Adrian I asking French King Charles to provide assistance defending Rome in 772.

Even after this, the Dec. 25 Christmas holiday remained a minor one in a liturgical calendar packed with more prominent saints and feasts. The day’s importance increased, however, in A.D. 800, when Pope Leo III crowned the French King Charles, better known as Charlemagne, the first Holy Roman Emperor at St. Peter’s Basilica in Rome. This event marked a key moment for the spread of the Roman Catholic Church’s secular power across Europe. Centuries later, it became an important day on the church’s Gregorian calendar.

In the coming centuries, it became a particularly prominent holiday in England and marked the start of the iconic 12 days of Christmas — this was in spite of the country formally renouncing Catholicism in the early 1530s. In the 1640s, however, the Puritans in England’s parliament cracked down on the celebration of all of the saints’ days they associated with Catholicism, especially Christmas, condemning them as “popish” and pagan. Puritans in the Americas followed suit and not only questioned the appropriateness of the Dec. 25 date itself but also looked askance at the drinking, dancing and frivolity involved. After this, Christmas all but disappeared in England and North America.

The 19th century brought a major rebound for the holiday. On the Continent, Germans and Scandinavians incorporated pagan-derived pine trees, reindeer and a few other accessories. The Dutch, meanwhile, brought back St. Nicholas, whom they called Sinterklaas, the early ancestor of the modern Santa Claus.

In the English-speaking world, credit goes to New York-born author Washington Irving, whose five stories on Christmas rehabilitated the holiday in the 1820s. Irving kitted out St. Nicholas with the now-familiar pipe and introduced the tradition of stockings hung by the chimney. 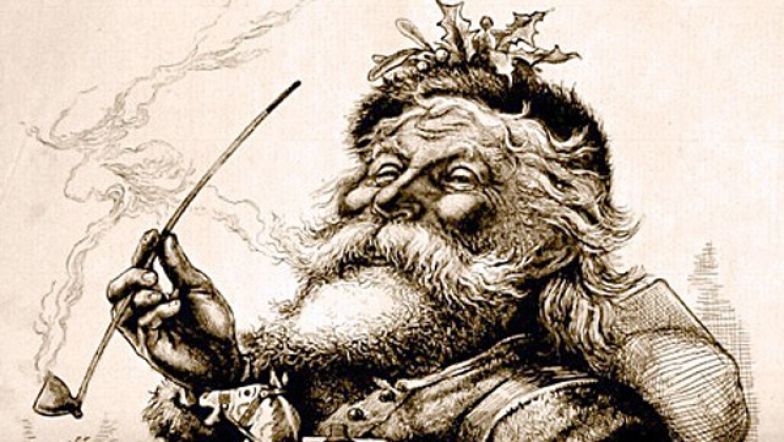 Pere Noel, or Father Christmas, had by now emerged in France, associated with the Christmas spirit but not with gift giving. And with some help from Charles Dickens and his famous 1843 “A Christmas Carol,” Santa and Father Christmas merged amid the holiday’s revival in Great Britain.

More voices then joined the chorus. Madison Avenue discovered the value of the jolly, gift-giving Santa in the late 19th century. In 1932 Coca Cola, as part of an advertising campaign, gave us the bearded and red-suited Santa Claus that has become a global icon. Through the 20th century, this Santa has spread not just throughout the Christian world but also to Japan, China, India and many Muslim countries, including Turkey.

This Christmas syncretism is not without controversy, and of course not everyone is pleased by the global spread of these symbols and rituals. Just this week, for example, Tajikistan banned trees, gift giving and other activities evocative of Christmas that have become part of New Year’s celebrations in the secular but predominantly Muslim country. Christmas is certainly Christian to the core. But the spirit of the holiday has become something larger, even universal. We can phrase this in geopolitical terms – the confluence of so many factors, from the rise of Rome to the crowning of Charlemagne to the role of the Puritans in America — but the holiday we see today is transcendent.

Back in contemporary Turkey, the merger of holidays and the rechristening of the New Year holiday as Noel began only in the late 1980s and was, appropriately enough, the brainchild of Vitali Hakko, a Jewish Turk and owner of the country’s largest department store. Visit Beyoglu, the main retail district of Istanbul today, and you will see portraits of Noel Baba, colored lights and Christmas trees bedecking the main boulevard.

Or as Mine would have it, Nayeel Baba. Her contribution to this most syncretic of holidays is just one small tributary in a cultural river that has been running for thousands of years.

We are of many faiths, creeds and national origins here at Stratfor, both in our Austin headquarters and in the field around the world. And this universality of the holiday is something that I, and I believe all of my colleagues here, embrace.

In our troubled era, with much that is venal in the world, Christmas is a celebration of innocence. In this, all the world can take heart. So from all of us, here’s to Nayeel Baba, and to the happiest of seasons to our readers, clients and supporters on this special day, in this special time of the year.