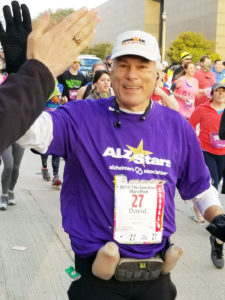 Lester & Lester proudly sponsored last week’s local chapter meeting of CoreNet Global real estate executives, featuring Rex Miller. Mr. Miller is an author, consultant and winner of the CoreNet Global Innovator and Industry Excellence Awards. I have had the privilege of getting to know Rex over the past 15 years and have a commonality in endurance athletics, especially in how it has worked for my life and me.

Some of you have asked for more details of my sports journey. The following passage is my story and how I pursued my interests and training which led my path. You may find it interesting and relate it to your own life or those close to you:

My mother first started having heart problems when she was a child. She told me her arrhythmia stemmed from scarlet fever. She continued with the affliction throughout her life.

When we lived in New York City, as a teenager I took her to the hospital emergency room and witnessed the doctors putting paddles on her chest to defibrillate her heart and keep her alive.   As you can imagine, this experience was traumatic for me and stayed with me over the years. As time went by I too began having what I thought was arrhythmia. I went to a heart doctor and he diagnosed Mitral Valve Prolapse which caused the flutter. With my family history, you can imagine that I was very concerned.  I started working through a mild depression.

In 1999 Blumenthal’s studies indicated that exercise helped the psychological well being of the body as well as or better than drugs.  His study came out and was steered over two populations: 1) ~156 people were given anti-depressive drugs under psychiatric care 2) ~156 people were given an aerobics exercise program.  After 16 weeks both groups were happier, but the exercise study participants were also healthier. Keith Johnsgard came out with a book explaining more in 2004 – Conquering Depression and Anxiety Through Exercise. That book went on to change my life.

In 2005 my daughter and her future husband began participating in and coaching endurance athletics. They began coaching me, and in two years I ran my first marathon.  This year I ran my seventh. In the middle I’ve completed two half Ironmans. I feel fit and healthy. I also found out that I was misdiagnosed with Mitral Valve Prolapse after worrying about it for about 10 years and through updated medical technology found out that my heart is actually healthy just a bit noisy.

Rex’s book comes out with a broader explanation of my limited experience.  When reading his book, I am reminded of my many paths taken over the last 10 years. It has worked for me. I very much support his efforts to bring about change in the workplace.